by John Vittas and Jon Lewis

Cons: strikes out a lot, struggles with breaking pitches 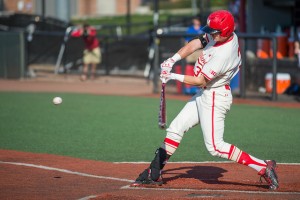 Vittas: Papio is a gifted athlete with solid all-around tools. He has gradually improved his hit tool during his time in College Park, becoming a patient hitter who can go to all fields. Papio won the “Iron Terp” Award for his dedication to the team’s offseason strength and conditioning program and is a respected leader for the 2015 Terps. He’s a steady, durable ballplayer whose athleticism suits him well in all aspects of the game. He’s done a good job shaking the label of a “streaky” hitter, but still needs to work on squaring up breaking balls.

Lewis: Papio has been a solid college performer, who I can argue has underachieved a little bit, especially in terms of average.  He has some of the best raw power on the Terps squad and is probably the strongest guy on the team.  I really like his hit tool and his developing power from the left side. He has a good approach, but sometimes takes too many pitches.  He runs well for a corner outfielder and takes good routes to balls in the gap/down the line.  He throws reasonably well from RF but may profile as more of a LF moving forward. An athlete with tools, it’ll be interesting to see if/where Papio goes.

Range: second half of draft

* John Vittas has been the play-by-play voice of the Maryland Terrapins and has called close to 100 games over the past four seasons.

* Jon Lewis is a former college baseball player and provided live analysis on Vittas’ broadcasts. He is pursuing a career in professional scouting.

To view all the Terps’ Draft Previews, click here.

One thought on “Maryland Draft Preview: OF Anthony Papio”