The Terps have channeled their inner Deion Sanders en route to a season-best 18-15 record (.545).

In each of their last four wins, Maryland has donned their military appreciation uniforms – camouflage fills the ‘Maryland’ wordmark and numbers on the Terps’ black tops, paired with matching camo hats.

“I’m going to do my best to push for it and wear them out until we lose in them,” senior Anthony Papio said of the alternate uniforms. “Sometimes you have to just go with whatever is working.”

Maryland first wore their specialized duds during their 13-5 victory over High Point two Saturday’s ago, breaking them out for Military Appreciation Day. It was their only win of the series.

Thanks to the school’s close partnership with alumnus and Under Armour founder Kevin Plank, Maryland’s athletic wardrobes are packed to the brim with the latest gear. The baseball team is no different, trotting out seven different uniforms thus far through 33 games.

Maryland is 14-15 wearing all other uniform combinations this season. But in their camouflage attire, they are a perfect 4-0, including all three wins against Ohio State.

“There’s a lot of mental things in baseball, that’s probably one of them,” said head coach John Szefc Sunday.

For Dan Maynard, the hero of Sunday’s 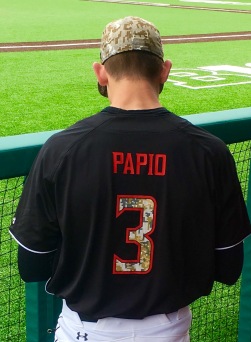 walk-off win that sealed the sweep of the Buckeyes, the choice is simple.

“I can speak for the rest of us,” he said, “if we can win in them, we’ll probably just keep wearing them…we’d wear them everyday.”

Papio will look to exert some senior influence on the jersey selection process, saying, “I’ll see if we can get Ronnie [Ohringer], our equipment guy, to stay on board.”

As far as his coach is concerned, if it isn’t broken, they won’t fix it.

“It’s really up to the players,” said Szefc. “Whatever they feel like is going to make us better we’ll wear…every one of our uniforms is good.
They look good, they feel good, so whatever is going to work, we’re going to keep going with.”