Skip to content
HomeMaryland beats VCU, 5-3, for 1st win of the season 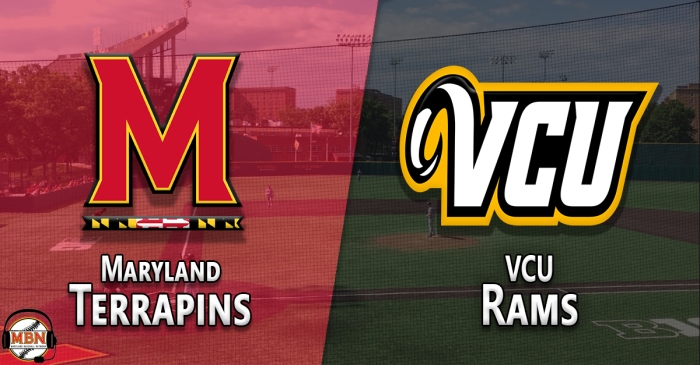 When outfielder Randy Bednar shot a single through the left side of the infield to give Maryland baseball a 4-3 lead in the top of the sixth against VCU, he looked far removed from the freshman that only hit .208 last season.

In the first two games in the Brittain Resorts Invitational, Bednar doubled and walked three times against Campbell and then delivered a two-run single against Coastal Carolina that accounted for all of the team’s scoring.

The RBI single off Rams reliever Sam Ryan gave Bednar a hit in all three games of the opening weekend — one that eventually became the game-winning moment against VCU to give Maryland its first win of the 2019 season.

Before Maryland held on for a 5-3 win — avoiding the program’s first 0-3 start since 2013 — Bednar had driven in another run to add to his promising first weekend as a sophomore.

“Randy’s just flipped the script,” head coach Rob Vaughn said. “… He was on base all weekend. He took his walks when they were willing to not get in the zone to him and then had two really massive RBIs for us today with two outs.”

Left fielder Caleb Walls and Bednar began the game with a single and walk, respectively, setting the Terps up for a fast start. After third baseman Taylor Wright successfully laid down a sacrifice bunt, designated hitter Maxwell Costes put Maryland up 1-0 with a sacrifice fly.

The small ball continued two innings later with the score tied. Wright laid down a safety squeeze that scored a run to gain another one-run advantage — a bunt that ended with him standing on first base safely.

When the Rams eventually took a 3-2 lead in the bottom of the fourth, it was the result of three Maryland mistakes. To that point, VCU’s runs came on a bases-loaded hit by pitch, a wild pitch and a failed pickoff attempt.

But the Terps wouldn’t continue those miscues for the remainder of the weekend finale, something Bednar feels is imperative moving forward.

“If we can eliminate the little things and take care of what we can take care of,” Bednar said, “… I think that’s when we’re going to be really successful. It kind of showed today.”

Starting pitcher Tyler Blohm, still working his way back from an injury suffered last season, threw exactly 40 pitches in 2 1/3 innings before the bullpen worked together to finish off the game.

Maryland used six relievers, three of which threw multiple times this weekend, to follow Blohm’s planned abbreviated start. The final five relievers didn’t concede a single run, shutting the Rams out over the last five innings. The Terps have already used more pitchers this season than all of the 2018 campaign.

“Our strength with this staff is not necessarily in straight up stuff,” Vaughn said. “It’s in the army of guys we have down there.”

That infantry stepped up in huge situations on Sunday, starting when junior Nick Turnbull entered in the fifth inning with two runners on base and one out in his Maryland debut. He allowed a single but stranded the bases loaded before working a perfect inning in the sixth.

In the seventh, VCU put two more runners on base still trailing by only one run. Freshman Will Glock, who had pitched the day earlier, came in during the high-pressure situation and struck out the only batter he faced.

After Bednar added insurance in the eighth inning, VCU put the tying runs on base in its last two trips to the plate. But in closer John Murphy’s season debut, the senior survived a six-out save to secure the victory and salvage the weekend with a win.

“We would’ve loved to leave here more than 1-2 and flip that a little bit, Vaughn said. “But at the end of the day we’re learning, getting better and got a lot to work on this week.”