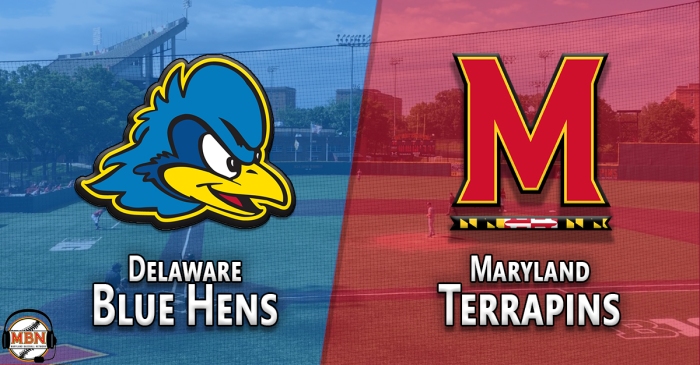 After dropping two of the three games against Louisiana Lafayette on walk-offs, Maryland looks ahead a home game Tuesday against. The Terps come into this midweek game with a 6-4 record as they take on the winless Blue Hens.

Last season, the Blue Hens took both games against the Terps but they have since lost a lot of key pieces — including a few crucial batters and pitchers to graduation and the draft, and it has shown in their performance so far this season.

Maryland’s pitching staff only allowed eight runs in three games over the weekend and suffered two heartbreaking walk-off losses. However, it was an impressive showing from the starters and the bullpen, with nine different relievers utilized. Juniors Nick Turnbull and Elliot Zoellner each had impressive appearances. Turnbull pitched two innings without allowing a run, while Zoellner tossed 1 ⅔ innings in relief picking up three strikeouts.

Sophomore Chris Alleyne collected three hits over the weekend including an RBI triple and scored one run. Alleyne also made a spectacular catch in extras to prevent the winning run from scoring.

A man named Bubba made an amazing catch… that is all you need to know! Just 👀

Another sophomore who picked up a team-high three hits this weekend was Tommy Gardiner. In addition to picking up his first three hits of the year, the sophomore also scored two runs for the Terps.

Delaware finished last season with a 31-27 record and went 13-12 in conference play. The Blue Hens also won a few games in the losers’ bracket of the Colonial Athletic Association tournament. However, Delaware lost critical players for its offense and defense to the MLB draft. Nick Patten was drafted by the Pittsburgh Pirates, who led the team in home runs and was second in RBIs. Delaware also lost one of their key pitchers, Kyle Hinton, who led the team in innings pitched. Hinton was drafted by the Kansas City Royals.

The Blue Hens are 0-10 this season and have suffered a mixture of close game losses and blowouts. Delaware is coming off a brutal series against New Mexico State, where it was outscored 54-12. Overall, it is evident that they are missing some valuable pieces from last year on both offense and defense.

Sophomore Zack Miller leads Delaware on the offensive side of things with a .344 batting average in 32 plate appearances. Miller also leads the team in hits with 11, while also recording one home run and four RBIs.

Senior Erik Bowren leads the Blue Hens with six runs scored, two triples and a .906 OPS. Another batter that has been important to their offense is redshirt sophomore Jordan Hutchins, who is hitting .273 with a team-high six RBIs.

After losing a lot of relievers from last year the Blue Hens haven’t been able to find too many consistent bullpen arms at this point in the season. One reliever that has stood out has been freshman, Jack Dubecq. The righty has tossed 6 ⅔ innings while only allowing two earned runs and has racked up three strikeouts.

Another reliever to keep an eye on is freshman Joey Silan. The right-hander owns a 9.00 ERA but it can be deceiving since he has only tossed six innings. A deeper look into his stats show that he possesses a 1.67 WHIP while limiting opposing hitters to just a .217 batting average.

Last week, sophomore left-hander Drew Wilden started in Maryland’s first midweek game of the year. He allowed one run in two innings with one walk in two strikeouts.

Delaware has yet to play a midweek game, and is coming off a four-game weekend against New Mexico State.