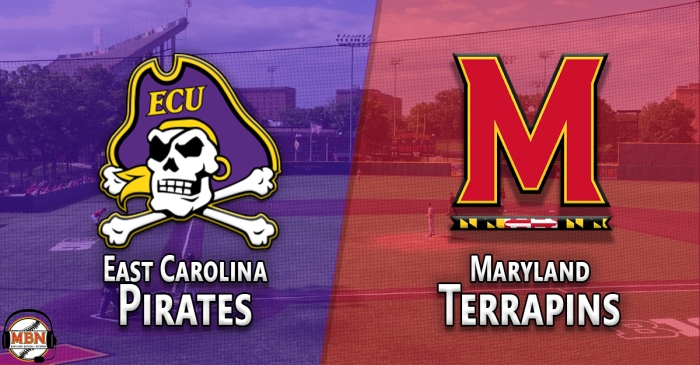 With its 11-6 win over the Delaware Blue Hens on Wednesday, Maryland (10-5) has won four of its last five games, putting up at least seven runs per game. The Terps will look to ride the momentum of their two-game win streak entering their’ weekend series against the No. 17 East Carolina Pirates (12-6) in College Park.

Maryland is 6-12 against East Carolina in the series history, including the Pirates’ sweep of the Terps in 2018. Last season, Maryland started its spring break road trip with a weekend series at East Carolina, during which the Pirates outscored the Terps, 26-4. This year, Maryland will look to avoid the sweep and put up more than last year’s four runs.

After earning his second Big Ten Freshman of the Week honor, Maryland’s freshman phenom Maxwell Costes continues to shine in the box,  hitting his first grand slam with the Terps on Wednesday in Delaware. The homer was his third of the season. Costes, the only regular starter batting above .300, leads Maryland in RBIs (19) and on-base percentage (.457) as well.

With third baseman Taylor Wright and outfielder Randy Bednar batting on the cusp of .300, each hitting .295, Maryland’s new leadoff hitter Chris Alleyne has provided a boost for the Terps. Wednesday marked Alleyne’s second consecutive game with at least one homer.

The Terps used five relievers on Wednesday, but with their bullpen depth, Maryland will have some flexibility on the mound this weekend. Maryland has six relievers who hold below a 3.00 ERA, including freshmen Will Glock (1.50 ERA) and Andrew Vail (2.25 ERA).

East Carolina dominated in 2018, winning the American Athletic Conference championship. The Pirates ended their postseason push with a 44-18 overall record, after a loss to North Carolina-Wilmington eliminated East Carolina during the NCAA regionals.

Now, the Pirates continue to dominate, outscoring opponents 104-81. East Carolina enters the weekend coming off a 7-2 loss to No. 24 Duke (12-5), lacking the momentum Maryland has after its success in Delaware.

East Carolina has five batters hitting over .300, two of which are batting over .400. Sophomore Alec Burleson leads the Pirates with a .469 average, 30 hits and 13 RBIs. The other Pirate hitting over .400 is freshman Lane Hoover, who has the second-highest on-base percentage for East Carolina (.488), just behind Spencer Brickhouse’s .545 OBP.

As Maryland’s senior ace, Parsons continues to dominate from the rubber. With a 1.00 ERA in 27.0 innings pitched, the righty has allowed only three runs––all earned––while recording 23 strikeouts.

For East Carolina, Agnos has been consistent on the mound, with a 2.78 ERA in 22.2 innings pitched. The left-hander has allowed seven earned runs while striving out 34 this season.

In his first season playing for the Terps, enters the weekend series with a 3.74 ERA across his four starts, tied with Parsons for the most strikeouts (23) this season.

Entering the season uncertain of who would round out their weekend rotation, the freshman LaBonte has provided the Terps with solid numbers as Sunday starter. Entering the weekend with a 2.60 ERA in 17.1 innings, LaBonte has struck out 13 so far this season, allowing only five earned runs.