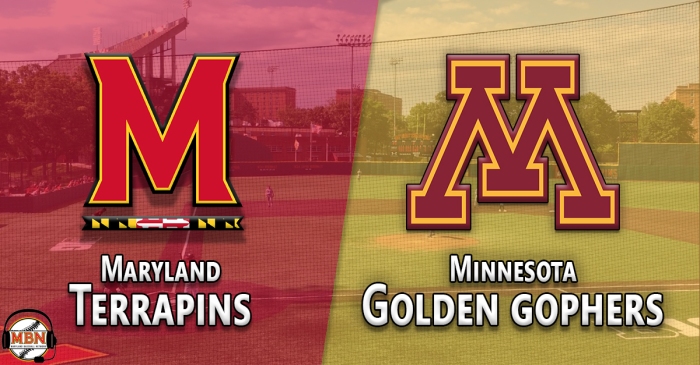 Maryland (23-25, 8-10) enters its last road series, a three-game set in Minnesota, hovering in eighth place in the Big Ten standings.

Now, the Terps likely need at least two games over last year’s conference champs in order to have a shot at a Big Ten Tournament appearance. Maryland didn’t play a midweek this week, so it enters the series on four days of rest, compared to Minnesota’s two rest days.

Sophomore Randy Bednar and senior AJ Lee both enter the weekend on the cusp of .300, batting .294 and .291, respectively. Bednar leads the Terps in doubled (19) and RBIs (44), while Lee has the highest on-base percentage (.429) of Maryland’s squad.

Third baseman Taylor Wright, another Terrapin multi-base hit powerhouse, also rests just below the .300 mark (.281). Prior to last weekend, Wright led Maryland in doubles. Now, the senior has 18, trailing Bednar by one double. Bednar leads the Big Ten in doubles, with Wright just behind him.

In recent weeks Maryland’s bullpen depth has been tested, but the Terps held their own. Left-hander Andrew Vail and righty Nick Turnbull have both thrown sub-3.00 ERAs, with 2.60 in 17.1 innings pitched and 2.76 in 16.1 innings pitched, respectively. Vail proved particularly vital to the Terps’ bullpen, with 24 strikeouts in his 18 relief appearances.

Closer John Murphy enters the weekend with nine saves, tied with Michigan’s Willie Weiss for the third-most saves in the Big Ten. Murphy’s 45 strikeouts in 27.2 innings pitched are the third-most Ks among the Terps’ pitchers, and the most Ks among Terrapin relievers.

Minnesota dominated the Big Ten in 2018, finishing the regular season with a 44-15 record and a 18-4 conference record, walking away with the Big Ten regular season and tournament titles. The Golden Gophers made it to the NCAA Super Regionals, where the Oregon State Beavers handed them a pair of losses and ended their postseason run.

Now, the Golden Gophers are struggling to recreate last year’s success. With an 11-7 Big Ten record, Minnesota hovers in fifth place in the conference standings, right behind Iowa (29-17, 11-7). The Golden Gophers enter the weekend matchup riding a three-game sweep of the Ohio State Buckeyes, and a midweek victory over South Dakota State on Tuesday.

Catcher Eli Wilson leads Minnesota’s offense, the only Golden Gopher batting above .300. Not only does the junior lead Minnesota in batting average (.314), but he also has a team-high 53 hits. Senior outfielder Ben Mezzenga is on the cusp of breaking .300, batting .281 with a team-high 29 walks.

Southpaw Jeff Fasching leads Minnesota with a 1.38 ERA in 26 innings pitched, followed by fellow lefty Nick Lackney (2.68 ERA in 20.1 innings pitched). For a Terrapin squad that has struggled against lefties this season, the pair will likely get the call at least once over the weekend.

After a solid start to the year, Parsons has proven he deserves his spot as the Terps’ ace. The senior has a team-high eight wins in his 12 games started, with the lowest ERA of all Maryland starters. The righty also leads the Terps with 62 strikeouts in 82 innings pitched.

For Minnesota, two-way player Meyer has settled into his role as the Golden Gophers’s Friday starter. With a team-high 79 strikeouts in 70.1 innings pitched, including nine starts and five relief appearances, Meyer enters the weekend a serious threat for the Terrapin offense.

Entering the weekend, the Terps have won only two of Thompson’s 12 starts. Though the righty has 52 strikeouts in 69.2 innings pitched, Maryland’s offense has struggled to provide the redshirt junior with adequate run support.

Minnesota’s Saturday starter, Thoresen has the second-most strikeouts (63) among the Golden Gophers’ staff. The right has made 11 starts on the year, pitching 43.1 innings for Minnesota. The Thompson-Thoresen matchup has the potential to turn into a pitcher’s duel, if Maryland’s offense shows up.

LaBonte enters the weekend with the highest ERA of the Terps’ starters, in the fewest innings pitched (50). In freshman’s first season with Maryland, the righty has 40 strikeouts in his 11 starts and one relief appearance.

For Minnesota, the sophomore Culliver has developed into an average Sunday starter, entering the series with 42 strikeouts in 51 innings pitched, including 10 starts and four relief appearances.