Skip to content
HomePreseason Countdown No. 13: Biggest holes to fill in 2020 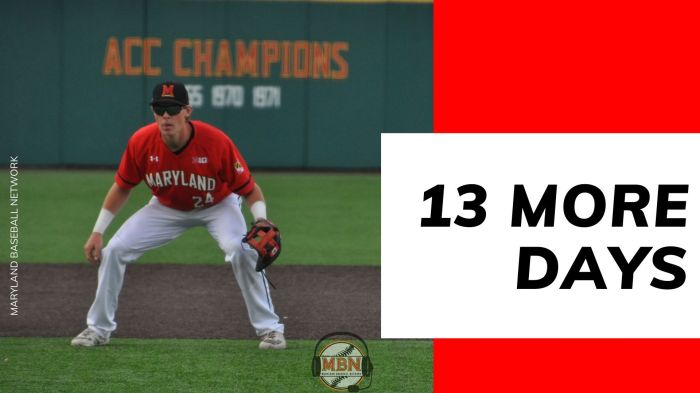 Though the Terps only lost four seniors in 2019, those four were major players in Maryland’s offense and defense and their exits left four major holes to fill.

Starting on the mound, Terrapin ace Hunter Parsons finished his career with Maryland as head coach Rob Vaughn’s strongest arm. His 10-win senior campaign marks the third-most wins in a single season in team history, and his 17 career wins the fifth-most.

As a senior, Parsons’ series-opening starts provided much-needed momentum heading into big weekend series: even when the Terps lost the second and third matches, Parsons often secured the series-opener win to avoid a sweep. For instance, when Indiana came to town in late-March, Parsons pitched a shutout and tossed five strikeouts in eight innings, securing a 2-0 Maryland victory.

Parsons finishes his eighth scoreless inning at 114 pitches. What a performance from the senior.

Parsons finished his time as a Terp with a dominant senior season, recording a 3.45 ERA  and 78 strikeouts in 104 1/3 innings. His strength on the mound led to a 19th round selection in the 2019 MLB Draft by the New York Mets.

But Parsons wasn’t the only Terrapin pitcher to leave Maryland. Closer John Murphy’s time as a Terp also came to a close with the endow the 2019 season. As a senior Murphy recorded 11 saves, the third-most in a single season in team history, providing reliable late-inning relief.

Murphy closed out his Terrapin career with a 4.32 ERA and 54 strikeouts in 33 1/3 innings last season. After leaving Maryland, Murphy played independent ball with the USPBL Westside Wooly Mammoths, racking up 11 strikeouts in 11 innings pitched and one save.

In addition to the missing arms, the Terps also lost the left side of their infield. Both third baseman Taylor Wright and shortstop A.J. Lee finished their careers at Maryland last season after providing key defensive support and offensive production in 2019.

At the hot corner, Wright finished with a .940 fielding percentage after starting in all 58 of the Terps’ 2019 games. Wright’s bat came alive last season, slashing .290/.375/.429 with 32 RBI and a conference-high 20 doubles, more than twice as many as in 2018 (nine doubles) and the fourth-most in a single season in team history.

Shortstop A.J. Lee finished last season leading the Terps in batting average (.317), with 13 doubles, seven home runs, 36 RBI and a .443 on-base percentage. Lee was also the only Maryland batter to his a walk-off home run last season, launching the deciding two-run blast in the Terps’ series opener against the Iowa Hawkeyes for a 8-6 victory.

One of Maryland’s most-productive offensive leaders in 2019, Lee also had the second-most double plays on the team (33), behind only first baseman Maxwell Costes.

The second Terp drafted last year, the Houston Astros selected Lee in the 34th round of the MLB draft.

Both Wright and Lee earned All-Big Ten third team honors at the end of the season, as did Parsons.

Now, the Terps are tasked with filling four holes in their lineups.