Skip to content
HomePreseason Countdown No. 11: Meet the newcomers — Freshmen 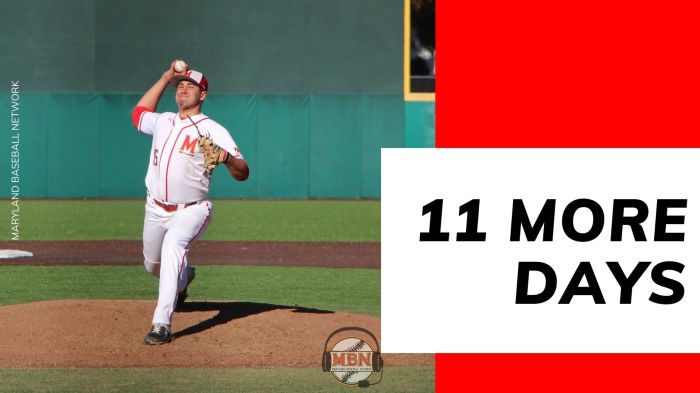 As a whole, Maryland’s class of recruits this year ranked the highest in team history in December, when D1Baseball.com ranked the Terps No. 7.

While Maryland may only welcome two new transfers to its squad in 2020, there are a whopping 13 freshmen joining the team.

Here’s a breakdown of the first years:

Bello is one of six new arms joining the Terps’ squad this season. Out of high school Bello was the fourth-ranked right-handed pitcher in New York and was named CHSAA Player of the Year. Bello posted a 0.82 ERA over his junior and senior seasons, with a combined 106 strikeouts in 59 2/3 innings.

Boots 🥾 on the ground in White Plains as @GaelsBaseball takes on @Step_Baseball . 2019 RHP & Maryland Commit Sam Bello works around a 2-out walk and 2B to strike out the side. Sitting 90-91 MPH early with late action breaker at 78-79. @NathanRode @ShooterHunt @PBRNewYork pic.twitter.com/RCsowa6kXi

Chaney was the No. 1 ranked right-hander out of West Virginia. As a senior at the Saint James School he recorded a 6-2 record with 48 strikeouts and helped lead the Saints to their first Mid-Atlantic Conference title in school history.

Chaney went one inning during the Fall World Series with one strikeout, while allowing seven walks and four runs.

Staine finished high school with a combined 19-6 record and 1.70 ERA. He was named First Team All-NJACC, All-State, and was the 2018-19 MVP. As a senior, Staine recorded 72 strikeouts in 65 innings pitched.

As the No. 3 ranked right-hander in New York, Falco helped lead Center Moriches to back-to-back state championships and an undefeated 26-0 season in 2019.

During the Fall World Series Falco tossed one scoreless inning, before throwing 1 2/3 innings against Army, where he struck out one batter and allowed three hits and three runs.

Ramsey was the 2019 New Jersey pitcher of the year, after he led Pascack Hills with a combined 19-2 record in 142 innings pitched with 255 strikeouts. He was named All-State in both his junior and senior years, when he led the school to back-to-back state championships. He also tallied 107 strikeouts in 63 1/3 innings pitched as a senior, allowing only six earned runs. Ramsey was drafted in the 36th round by the Cleveland Indians in the 2019 MLB Draft, but elected to continue his education and to further develop at Maryland.

Ramsey tossed two innings during the Fall World Series, striking out one and allowing five runs on three hits and two walks. Against Army Ramsey went 1 1/3 innings and allowed six runs on four hits and one walk.

As the third-ranked right-hander out of Pennsylvania, Dean helped Bensalem to a 23-4 finish and a district championship victory his junior year, when he tossed a 1.16 ERA in 48 1/3 innings pitched. He was also named First Team A–Suburban. While he missed his senior season due to injury, he has showed potential so far.

Dean went three innings during the Fall World Series, tallying three strikeouts with one walk and one hit-by-pitch. Against Army, Dean tossed two innings, striking out one while allowing two runs on one hit and two walks.

Schreffler Jr. was a two-time All-PIAA Conference honoree with Central Dauphin and an eight-time First Team All-Tournament honoree in club baseball. Primarily an outfielder, Schreffler also has experience as a pitcher.

Out of high school Schreffler was the fourth-ranked outfielder in Pennsylvania and the 11th-ranked player overall in the state. He tallied two singles during the Fall World Series with three more singles and an RBI against Army.

Flint batted .545 his senior season with a .677 on-base percentage and 1.045 slugging (including seven triples), helping Bishop Hendricken to two state championships, including a 23-0 record in 2019, before he was drafted by the New York Mets in the 36th round of the 2019 MLB Draft. Flint opted to continue his education at Maryland instead.

During the Fall World Series, Flint went 1-for-4 with a single, three walks and one hit-by-pitch. He also DH-ed against Army and went 2-for-5 with a single, a double and one RBI.

During the Fall World Series, Zmarzlak went 1-for-3 with a single and a walk while designated hitting. He is the No. 1 prospect in the Big Ten according to Perfect Game.

Orlando was the fifth-ranked shortstop in New Jersey out of high school and has some experience on the mound.

In his high school career Orlando tallied 12 home runs and was a three-time All-South Jersey honoree. During the Fall World Series, Orlando showed off his strength at the plate with a three-RBI double.

The No. 3 ranked shortstop in New York, Perez was named Perfect Game All-Tournament Team three times. As a senior at All Hallows, Perez slashed .280/.514/.560 in 12 games with seven stolen bases, a pair of triples, a double and one home run.

Perez had one plate appearance during the Fall World Series, when he walked on five pitches.

The No. 1 first baseman in Maryland, Bouma finished his career at Sherwood with a .433 average and 93 hits, including 11 home runs and 96 RBI. Bouma helped the Warriors to a State Championship runner-up finish in 2019 and was named All-Met/All-State both his junior and senior seasons. In all our years at Sherwood, Bouma’s lowest batting average was .339 his sophomore year.

Bouma went 1-for-5 during the Fall World Series with one walk and a single. He played first base and then spent some time at third against Army.

Heffley went 0-for-1 with an RBI on a sacrifice squeeze bunt during the Fall World Series, which he entered after junior catcher Justin Vought was hit in the wrist.