In 2019, the Maryland outfield had proven to be one of the team’s offensive and defensive strengths, and the bulk of that outfield will be returning for the 2020 season.

Highlighted by juniors Randy Bednar and Chris Alleyne along with senior Caleb Walls, the outfield features plenty of new faces as well, including three freshmen and the returning Ben Irvine.

Here is a breakdown of each Terp that’s expected to be roaming the outfield this Spring:

Bednar will likely continue to be the Terps’ stalwart right fielder in 2020 and should be a solid leader for the incoming freshmen.

As a redshirt junior, Walls put up pretty solid numbers as the everyday left fielder in 2019, getting on base at a .352 clip and hitting for a .704 OPS.

He’ll attempt to repeat his on-base tendencies in 2020, as his .352 OBP was over .100 points higher than his batting average.

The second junior to be likely starting in the outfield in 2020, Alleyne will be bringing his incredible glove and agility back to Bob “Turtle” Smith Stadium.

After hitting for a quality .749 OPS in 2019, “Bubba” will look to improve upon that while maintaining his game-changing range in center field.

Irvine only made 14 appearances in his debut season last year, three of those being starts. He batted .087 with an OBP of .158 but didn’t see much playing time following April.

With a rather-crowded outfield compared to last season with three incoming freshmen, Irvine will likely still get the majority of his plate appearances as a pinch-hitter.

Schreffler Jr., who pitched as well as playing the outfield at Central Dauphin High School in Pennsylvania, will strictly be an outfielder for the Terps in his freshman year.

The freshman was ranked as the 11th-best player in the state of Pennsylvania, and in the Terps’ Fall World Series games recorded a pair of singles. 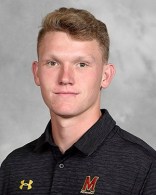 Flint was awarded the title of 2019 Rhode Island Gatorade Player of the Year in his senior year at Bishop Hendricken High School. He had been drafted by the New York Mets in the 36th round of the 2019 MLB Draft but opted to commit to Maryland.

With the core of Maryland’s outfield being made of a senior and two juniors, Flint leads a very talented group of freshmen outfielder looking to make their presence known.

Like fellow freshman Tucker Flint, Zmarzlak was also drafted in the 2019 MLB Draft — selected by the Baltimore Orioles in the 40th round. Nationally, Zmarzlak ranked 17th among all outfielders and was the No. 1 ranked player in Connecticut.

Named the No. 1 prospect in the Big Ten, according to Perfect Game, Zmarzlak will look to have a huge impact as he leads the incoming freshmen with his teammate Flint.