For the majority of the season Brian Shaffer manned the Sunday slot in the rotation, suppressing opposing offenses at the tail end of nearly every series as the consummate blend of Friday and Saturday starters Mike Shawaryn and Taylor Bloom. And for a Maryland team that struggled with consistency series to 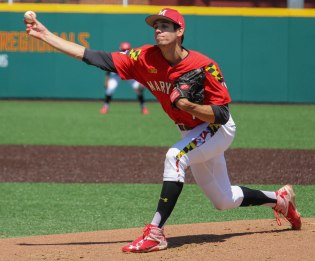 While he didn’t exhibit the swing-and-miss stuff of Shawaryn that rung up 97 batters in 99 innings, or the single-digit walks of fellow sophomore Bloom, Shaffer proved a devastating combination of the two. He walked just 13 batters on the year, four more than Bloom but half as many as Shawaryn, and did so in a team leading 103.2 innings. And while his 2.60 ERA was only 14 points higher than Bloom’s team-leading 2.46, he kept opponents off the bases more effectively than his two counterparts. Shaffer’s WHIP was a team-best 0.88 and contributed to another team-low with 33 runs allowed.

The lack of base runners, and the best of both Bloom’s command and Shawaryn’s ability to punch out hitters made him a formidable foe for any day of the week, let alone potentially series-deciding Sunday games. In games where he got the ball, the Terps went 10-5. In Shawaryn’s starts, Maryland went 8-7. With Bloom on the hill, the Terps managed just a 6-8 record.

Shaffer led the Terps to six wins in eight series-deciding games, seven that entered Sunday tied one game apiece and a win in the second half of a Friday doubleheader that secured a series win over Ohio State. Two more of his starts—at Iowa and hosting Rutgers—salvaged a win and prevented the Terps from getting swept in conference matchups.

Shaffer played an unquestionably large role in Maryland avoiding a sweep in each of their 14 weekend series. Michigan State was the only other Big Ten team to not suffer a sweep all year. Sweeps can be the glaring Achilles’ heel for a team in playoff contention, as the Terps were. And because they hadn’t gone winless in any series, they had a shot to play themselves into the playoff conversation as the season wound down. Although Shaffer did all he could to clinch a third-straight NCAA Tournament appearance for Maryland, his numbers, and their corresponding rankings atop the Big Ten leaderboards, spoke volumes of his contributions despite entering the year with just 11 collegiate starts under his belt.

It was a sweep at the hands of Maryland to the visiting Ohio State Buckeyes that jumpstarted the Terps’ winning ways, raising them two games above the .500 mark for the both the first time and for the remainder of the season. After that point—excluding one 3.1 inning start against Purdue (four-earned runs) when Bloom’s rolled ankle presented Shaffer with a surprise Friday start—Shaffer threw 54.1 innings, walked six batters and struck out 43 with a 1.98 ERA and a 0.79 WHIP when his club needed him the most.

Not only did his eight-inning, three hit shutout on May 15 prevent a sweep from the under .500 Scarlet Knights in the second to last series of the year, it allowed the Terps to clinch a conference tournament appearance with just two wins against a potent Michigan State club in the season’s final series instead of a sweep. And it was on that following Sunday in East Lansing with the series tied 1-1 and the Terps’ playoff hopes resting squarely on his shoulders that Shaffer shone brightest, gritting his way through the game after having his fourth pitch smoked back up the middle off his right knee.

He battled through eight innings in the Terps’ 6-4 win that clinched their third-straight conference tournament berth. Six days later on the brink of elimination, he once more extended his team’s season. This time, it was not only the best outing of his breakout sophomore campaign, but arguably the best start of any Terrapin pitcher all year. He tossed a complete game two-hitter, walked none, struck out eight and didn’t allow an Indiana Hoosier to reach second base.

As a daunting mixture of the best parts of Bloom and Shawaryn’s games, Shaffer made a name for himself, giving the Terps a luxury few teams across the country had: a young Sunday starter with pinpoint control, strikeout ability and an ability to keep runners off the base paths.

Stay tuned throughout the off-season as the MBN staff details their picks for the Terps’ 2016 MVP, breakout freshman and most improved player.