Maryland baseball head coach Rob Vaughn accumulated 24 wins in his first season at the helm of the program, including an impressive 4-0 victory over Tennessee in the season-opener and a series victory at home over Stetson.

But the best individual win of 2018 came at Coastal Carolina, which hosted an NCAA Regional in a 43-19 season. The Terps fended off a ninth-inning Chanticleers rally, taking advantage of a game-ending interference call to claim a 7-6 victory.

Here’s a repost of Maryland Baseball Network’s game recap from the thriller: 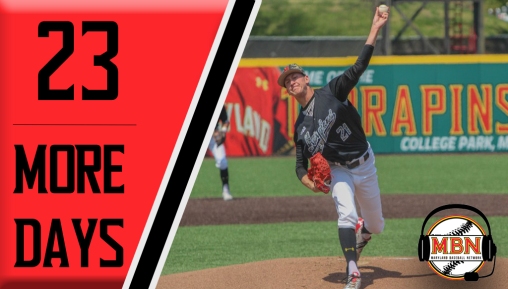 With his team owning a .212 batting average heading into Saturday, Maryland baseball head coach Rob Vaughn decided to significantly alter his batting order against Coastal Carolina, despite breaking out for 11 runs on nine hits the prior morning against Radford in the opening game of the Johnny Gardner Law Group Tournament.

The Terps lineup started the same way in every game this season—Marty Costes, Zach Jancarski, Nick Dunn, Taylor Wright and AJ Lee—but all five hitters vacated their respective spots for a new location in the order. Implementing a new-look lineup, Maryland had their most complete offensive performance of the season and benefited from a game-ending interference call to hang on against the Chanticleers, 7-6, to extend its winning streak to four games.

Third baseman Taylor Wright quickly found himself in an 0-2 hole following consecutive outs to start the game, but the junior transfer worked a walk to keep the first inning alive. Marty Costes, who relinquished his spot atop the order, was then hit by a pitch. Capping off the rally, Kevin Biondic delivered a two-out RBI single in his first at-bat in the five-hole this season, giving Maryland an early advantage.

Right fielder Randy Bednar and catcher Ty Friedrich both drew walks the next frame, but later in the inning with Wright in another 0-2 hole, it looked like the Terps were going to leave the bases loaded. But in his first appearance batting third, Wright singled up the middle to add two more runs. Through two innings, all three runs for the Terps came with two outs.

While the Terps came into the game struggling at the plate, Coastal Carolina boasted an offense with six hitters batting over .300. Averaging 8.3 runs per game, the Chanticleers had four games with at least 10 runs and three double-digit wins in their first 11 contests. For the most part, though, the Chanticleers were held in check by the Maryland arms.

Facing one of the best offenses he’ll face this season, starting left-handed pitcher Tyler Blohm danced with danger but consistently made big pitches with runners on base in his third start of the season. The sophomore southpaw held the Chanticleers to 1-for-8 with runners on, conceding just a pair of solo home runs over six innings while striking out seven batters.

Chanticleers first baseman Kevin Woodall Jr. got his team on the board, hitting just the fifth-ever home run over the 20-foot center field wall at Springs Brooks Stadium. Center fielder Parker Chavers homered to right in the following frame for his first long ball of the season.

In between Coastal Carolina’s pair of homers, the Terps offense responded to give Blohm more run support. Biondic doubled with one out in the top of the fifth and, after Coastal Carolina made a pitching change, an AJ Lee single preceded an RBI double off the wall from Bednar.  Friedrich added the second run of the inning with a sacrifice fly, extending Maryland’s lead at the time to 5-1.

A catchers’ interference on Friedrich extended Coastal’s bottom of the fifth after Chavers’ home run, but Blohm struck out Woodall Jr. for the second time to strand two runners on base with a 5-2 lead. Coastal’s second run came with another response, however, as Nick Dunn hit his fifth home run of the season to re-extend Maryland’s lead to four in the top of the sixth. Dunn, a preseason All-American, had five homers all of last season.

Freshman left-hander Sean Fisher relieved Blohm in the seventh, recording the first two outs of the inning. After a controversial double that center fielder Zach Jancarski believed he caught, right-hander Elliot Zoellner allowed the runner to score on a passed ball and a wild pitch before allowing walks to both batters he faced after entering the game. Taking no chances, Vaughn put in closer John Murphy to get the final out of the seventh, a task the junior right-hander completed thanks to a diving grab by Biondic in foul territory.

But just like the previous two times Coastal Carolina scored, the Terps responded immediately. Pinch hitter Will Watson crushed Maryland’s second home run of the afternoon to maintain a four-run lead, a hit that proved to be essential in the win.

Biondic relieved Murphy, who let two hitters reach base to start the inning, and gave up a three-run homer on his third pitch. After hitting the game-tying run with one out, Turner Buis stole as his teammate Kyle Skeels struck out at the plate. An interference was called on the hitter, who stepped in front of catcher Justin Morris, and that ended the game.

Maryland holds on for its fourth straight win.