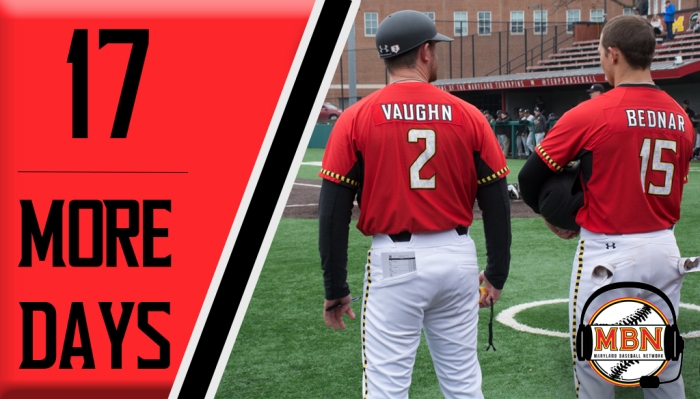 Vaughn and Parsons touched on a multitude of topics, but here are the five most important things we learned about the 2019 Maryland baseball team at media day.

Parsons is set in stone as Maryland’s Friday night starter, but the other spots still seem to be up for grabs. However, Vaughn said that Thompson has impressed so far this spring.

“[Thompson] gets after it and works his tail off,” Vaughn said. “He’s hungry too because he spent all year having to watch [from the dugout].”

Thompson is a redshirt sophomore right-hander who sat out last season after transferring from St. Mary’s College of Maryland, a Division III school. According to Vaughn, Thompson struck out eight batters in three innings in an intraquad scrimmage last week, and he’s now making a strong case for the open Saturday spot.

The head coach was also very impressed with O’Connor, a freshman who joined the team as a walk-on in the fall, and has maybe been the biggest surprise for the Terps so far.

“[O’Connor is] a local guy that we basically gave an opportunity to in the fall, not knowing what he would do,” Vaughn said. “That guy was unbelievable and has really shown us that he has a chance to start at a high level. Not a lot speeds him up, he’s tough, [and he] competes.”

2. Tyler Blohm and Drew Wilden are also in the rotation plans, but aren’t ready yet

Blohm posted a 4.10 ERA and 54 strikeouts in 59 innings over 11 starts. He was dominant at times, including a 12-strikeout performance against Stetson. But Blohm struggled with injury down the stretch, and that same injury followed him into the spring. Vaughn said Blohm recently got back on the mound, but he most likely won’t be ready for the opening weekend at Coastal Carolina. However, he is still a part of the rotation plans.

The same goes for redshirt freshman left-hander Drew Wilden, who missed last season after Tommy John surgery. Wilden was one of Maryland’s top recruits when he arrived in College Park, and Vaughn knows what he can bring to the team.

“I don’t know if it will be week one, but I would really look for Drew Wilden to continue making those steps. He threw [on Friday] … and was awesome.”

Vaughn said Wilden finally got back to the mound this week, a great sign for Maryland’s rotation.

3. Ben Cowles and Kody Milton could be starters in the infield

After the departure of stars Nick Dunn (2B) and Kevin Biondic (1B), the Terps have two holes on the right side of the infield this season. Sophomores Tommy Gardiner and Michael Pineiro will get their shots, but according to Vaughn, freshmen Ben Cowles and Kody Milton have really impressed so far this spring.

Cowles was one of the best infield recruits out of New York, and although shortstop is his natural position, he has shown the tools to get himself into the lineup at second base.

Milton, the son of former Maryland star Eric Milton, was the No. 1 first base recruit in Maryland, according to Perfect Game, and has shown what he can do with the bat.

“One of the guys that’s been through-the-roof tremendous is Kody Milton,” Vaughn said. “He had some adversity in the fall. Kind of struggled offensively, which a lot of young guys do, but his desire to be great is unbelievable.”

Vaughn said freshman Josh Maguire will also get a look at that open second base position, as he has plenty of options in the infield.

4. There are still question marks in the outfield

The Terps lost basically their entire starting outfield from last season, with Will Watson and Zach Jancarski graduating and Marty Costes leaving for the MLB Draft. Randy Bednar, who hit .208 in 43 games last season, will return to a starting spot in the outfield, but Vaughn said Bednar is the only player who has locked down an outfield spot.

Vaughn mentioned multiple other names, including Chris Alleyne, who spent his summer and fall converting to the outfield, and Sebastian Holte-Mancera and Caleb Walls, two junior college transfers. The head coach also talked about Pineiro, who came in as a first baseman, but also got plenty of reps in the outfield in the fall.

5. The Terps learned a lot in the classroom this offseason

Maryland has obviously worked on a lot in the fall and spring after a disappointing 24-30 record in 2018. However, the Terps also did a lot of work in the classroom. Vaughn explained how the team focused a lot on mindset and leadership, which had an impact on many of his players, especially his ace.

“I think it’s really cool. As a freshman coming in here, I would have never expected to be spending days inside talking about character and leadership. I think it’s really special,” Parsons said. “[The sessions were about] why do you play baseball. Why do you want to succeed? What are you thankful for? Stuff that just can keep you going every day. It’s all about putting baseball into perspective and realizing that it’s just a game that we’re lucky enough to play.”