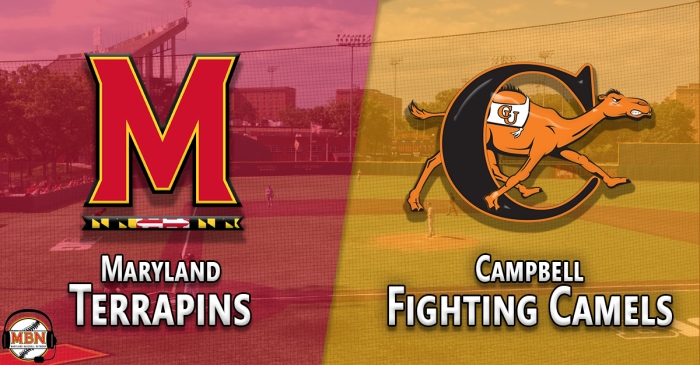 When sophomore catcher Justin Vought blasted a two-run homer to give Maryland baseball a 4-0 lead early in its season-opener against Campbell, it appeared the Terps would cruise to their first win of year.

Many question marks followed the team into the new season after the program lost several seniors and four players — including two commits — to the MLB Draft. Yet, three innings into the season, that seemed insignificant.

But the momentum completely flipped once Campbell finally got the board, scoring 10 of the game’s final 12 runs to hand Maryland an extra-innings 10-6 loss to start the 2019 campaign.

The first four hitters in Maryland’s order carried the Terps offense, picking up seven of the team’s eight hits, scoring all six runs and working five walks. The rest of the order couldn’t follow suit, finishing the day a combined 1-for-20 with eight strikeouts.

Leadoff hitter Caleb Walls started his Maryland career 2-for-2 after transferring in the offseason. He touched home plate to score the first run of the season in the first inning, and then delivered the team’s first homer of the season the following frame. He scored on a wild pitch in the bottom of the ninth to force extras.

Vought, who earned the starting catcher role, homered in the third and drove in three runs from the cleanup spot. Third baseman Taylor Wright led the Terps with three hits, but other than those few standouts, Maryland couldn’t generate enough offense in what became a failed comeback effort.

Parsons allowed a solo shot in the fourth, giving the Camels their first run of the game. That started a streak of four consecutive innings that Campbell scored. The ace exited the game with two runs allowed in five innings, and with the Terps up 5-2, looked poised to earn the win.

Unfortunately for Parsons, Maryland’s bullpen fell flat and couldn’t hold the advantage. An error in the sixth forced an unearned run upon freshman right-hander Sean Heine in his debut. And although lefty Sean Fisher stranded the bases loaded in the sixth, he then conceded the go-ahead runs in the seventh.

Right-hander Elliot Zoellner didn’t concede a hit through two innings, allowing Maryland to scratch across the game-tying run in the bottom of the ninth without recording a hit in the frame. But Zoellner’s success faded in extras, and Campbell scored four times to squash the comeback attempt.