Skip to content
HomeMaryland hangs on to beat Maine, 5-3, to sweep doubleheader 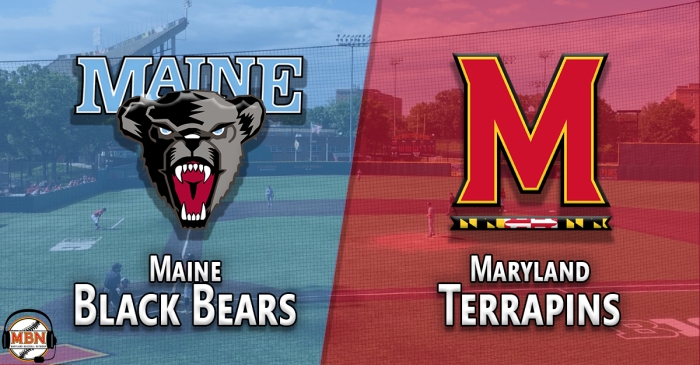 The third inning was the fall-apart point in right-hander Zach Thompson’s first-career  start for Maryland last week against No. 21 Coastal Carolina. But in Friday’s 5-3 win over Maine in the second half of a doubleheader, it was what propelled him to a complete turnaround performance.

Last weekend, Thompson hit a batter and allowed a single to begin the third frame. He induced a double play but then allowed three consecutive two-out hits in what became a three-run inning as the Chanticleers pulled away for a 7-2 win.

In his second outing against a struggling Black Bears offense, Thompson once again allowed a leadoff base runner in the third. And again, Thompson induced a ground-ball double play. This time, though, he got the pivotal third out by striking out third baseman Danny Casals, who proceeded to get ejected.

The junior starter wouldn’t allow another hit until the seventh inning, when he gave up two runs, but his strong start allowed Maryland to hang on to sweep Friday’s doubleheader and earn a winning record for the first time this season.

“Last week I was basically just a fastball pitcher,” Thompson said. “On the team we talk a lot about failure, and we say failure is a prerequisite to success.”

The righty couldn’t effectively throw his secondary pitches for strikes a week ago, forcing him to fall behind in counts and throw only fastballs to a potent offense. In bullpen sessions this week, though, Thompson changed his grip on his slider — a pitch that helped throw more strikes on Friday.

Thompson threw 73 percent of his pitches for strikes against Maine, which generated a season-high nine strikeouts.

“When [Thompson] has his second pitch, he’s unbelievable,” head coach Rob Vaughn said. ” … When he’s landing that second pitch and attacking the zone, that guy is tough, tough as it gets.”

After Thompson stranded a runner in scoring position in the top of the first, his offense provided immediate run support in the bottom half of the frame with a successful two-out rally.

Third baseman Taylor Wright walked and catcher Justin Vought placed a perfect bunt single down the third-base line to extend Maryland’s first trip to the plate. Designated hitter Maxwell Costes fell behind in the count, 1-2, but then fouled off four straight pitches before driving a two-run double into the right-center gap.

With right fielder Randy Bednar on second base in the third inning and Vought at the plate, the base runner broke for third. As he slid into third safely, the throw from catcher Cody Pasic sailed into the outfield and allowed Bednar to scamper home for another Terps run.

Maryland’s lead grew to 4-0 — the final score from Game 1 — as center fielder Chris Alleyne’s first hit of the season went up the middle for an RBI single. But the Black Bears wouldn’t go down with the same little fight from earlier in the day.

After 15 scoreless innings to start the series, Maine finally chased Thompson out of the game with two runs in the seventh. Designated hitter Colin Ridley drove in a run on a ground out, and left fielder Jake Roper singled in the next at-bat to cut the deficit to 4-2.

To that point, Thompson hadn’t really thought about how deep he was pitching into the game — something he hasn’t had to since he last pitched competitively since the 2017 season with St. Mary’s College (Md.)

Right-hander Elliot Zoellner relieved Thompson with two outs in the seventh, stranding the inherited runner in scoring position. While Maine cut its deficit in half, Terps first baseman Michael Pineiro got one back after the seventh-inning stretch with his own RBI single.

The Black Bears kept the contest competitive, scoring again the eighth and getting the game-tying run on first base with one out in the inning. But left-hander Sean Fisher got catcher Ryan Turenne to line out, and Pineiro stepped on first to complete an inning-ending double play to preserve the 5-3 lead.

Junior right-hander Nick Turnbull came on in the ninth since closer John Murphy had pitched in the first game of the doubleheader. Despite the suddenly close score, Turnbull worked around a leadoff walk to clinch the Friday sweep and the series victory.

“This team’s going to play some tight games,” Vaughn said. “They’re growing, they’re learning, they’re figuring out how to learn as a team and it’s obviously always good to come out on this end of it.”