Skip to content
HomePreseason Countdown No. 18: Best Comeback of 2019 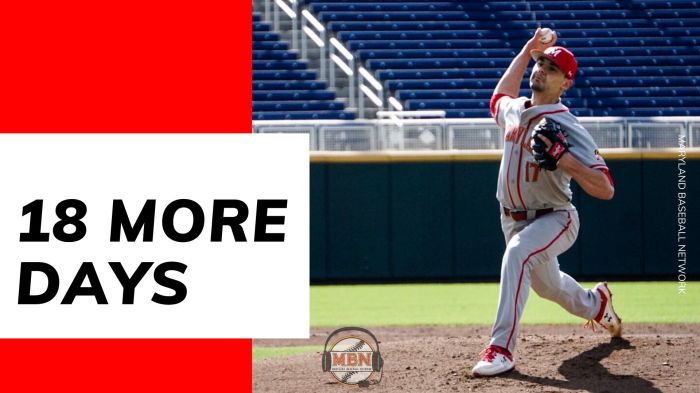 Trailing Illinois 2-0 on April 5th, the Terps had just one hit to their name entering the game’s final frame. But a four-run ninth inning put Maryland over the top to give the team its biggest comeback of the 2019 season and propel the Terps to their first series win in almost a month.

Leading off the inning was senior shortstop A.J. Lee, who quickly found his way on base with a single. Right fielder Randy Bednar followed with a knock of his own to put two men on with no outs.

Small ball became the key for success for Maryland as coach Vaughn called for a bunt with heavy hitter Taylor Wright stepping to the plate. The third baseman placed one off the mound, scoring Lee.

The runner was soon replaced, as first baseman Maxwell Costes was pegged by Fighting Illini pitcher Garrott Acton. The hit-by-pitch was Costes’ 11th of the season, a conference high. (He finished the season with the most hit-by-pitches in the conference, 19).

Left fielder Caleb Walls placed down another bunt for Maryland, driving in the tying run as Bednar crossed the plate.

The Terps took the lead late in the ninth, as their offensive outburst continued in an atypical fashion. A wild pitch by Acton scored Michael Pineiro, who pinch-ran for Costes, and Walls on a throwing error during the same play, increasing Maryland’s lead to 4-2.

MARYLAND TAKES THE LEAD!
Two runs come in on a wild pitch.

With just three hits in the game, two of which came in the final inning, the Terps won with the least amount of knocks since 2018.

On the other side of the ball, ace Hunter Parsons had a strong outing in the weekend opener. The righty went eight innings, allowing six hits and two runs. Closer John Murphy came in with the Terps leading in the ninth to earn his sixth save of the season with two strikeouts in the half.

The win proved to be a turning point in Maryland’s season as well. The team went into Champagne, Illinois, with 47 conceded runs in its last three games, all of which had resulted in losses.

After taking the series from the Fighting Illini on the road, the Terps moved to eighth in the conference and proceeded to win two of their next three weekend series against Big Ten opponents.

After a big two-win weekend at Illinois, Maryland baseball sits in 8th place in the Big Ten. The Terps will be at Northwestern next weekend. pic.twitter.com/EcdPifpXTP